How to prepare for a spirometry test
You can do a number of things to make sure you’ll be able to breathe comfortably and receive an accurate result during your spirometry test.

Spirometry procedure
A spirometry test usually takes about 15 minutes and generally happens in your doctor’s office. In some cases when more in-depth tests are necessary, they may take place at a respiratory laboratory.
Here’s what happens during a spirometry procedure:
1. You’ll sit in a chair in an exam room at your doctor’s office. The doctor or a nurse will place a clip on your nose to keep both nostrils closed. They’ll also place a cup-like breathing mask around your mouth.
2. Your doctor or nurse will next instruct you to take a deep breath in, hold your breath for a few seconds, and then exhale as hard as you can into the breathing mask.
3. You’ll repeat this test at least three times to make sure that your results are consistent, especially if there is a lot of variation between your test results. They’ll take the highest value from three close test readings and use it as your final result. Your entire appointment should last about 30 to 90 minutes.
If you have evidence of a breathing disorder, your doctor might then give you an inhaled medication known as a bronchodilator to open up your lungs after the first round of tests.
They’ll then ask you to wait 15 minutes before doing another set of measurements. Afterward, your doctor will compare the results of the two measurements to see whether the bronchodilator helped increase your airflow.
When used to monitor breathing disorders, a spirometry test is typically done once every 1 or 2 years to monitor changes in breathing in people with well-controlled COPD or asthma.
Those with more severe breathing concerns or breathing complications that aren’t well managed are advised to have more frequent spirometry tests.
Spirometry side effects
Few complications typically occur during or after a spirometry test. However, you may want to be aware of the following.
You may feel a bit dizzy or have some shortness of breath immediately after performing the test, according to the American Thoracic Society. In this case, stop immediately and tell your doctor. In very rare cases, the test may trigger severe breathing problems.
When you do this test, it will increase the pressure in your head, chest, stomach, and eyes as you breathe out. So, it is unsafe if you have heart problems or hypertension, or if you’ve had surgery on your chest, abdomen, head, or eyes.
Risks after a spirometry test
There are a few risks related to the spirometry test itself. However, there is a minor risk that you may get an indirect infection.
This could happen in several ways:This risk may be higher in different countries, where there are other standards and protocols for preventing the spread of infection.
The American Thoracic Society and the European Respiratory Society have official technical standards for conducting spirometry. These include disinfection guidelines and recommend disposable mouthpieces with filters to avoid infections.
Spirometry “normal” values and how to read your test results
“Normal” results for a spirometry test vary from person to person. They’re based on your: (age/height/race/sex)

Your doctor calculates the predicted “normal” value for you before you do the test. Once you’ve done the test, they look at your test score and compare that value to the predicted score. Your result is considered “normal” if your score is 80 percent or more of the predicted value.
Spirometry measures two key factors: expiratory forced vital capacity (FVC) and forced expiratory volume in one second (FEV1). Your doctor also looks at these as a combined number known as the FEV1/FVC ratio.
If you have obstructed airways, the amount of air you’re able to quickly blow out of your lungs will be reduced. This translates to a lower FEV1 and FEV1/FVC ratio.
FVC measurement
One of the primary spirometry measurements is FVC, which is the greatest total amount of air you can forcefully breathe out after breathing in as deeply as possible. If your FVC is lower than expected, something is restricting your breathing.
“Normal” or “abnormal” results are evaluated differently between adults and children.
For children ages 5 to 18:

For adults:An “abnormal” FVC could be due to restrictive or obstructive lung disease, and other types of spirometry measurements are required to determine which type of lung disease is present.
An obstructive or restrictive lung disease could be present by itself, but it’s also possible to have a mixture of these two types at the same time.
FEV1 measurement
The second key spirometry measurement is FEV1. This is the amount of air you can force out of your lungs in 1 second.
It can help your doctor evaluate the severity of your breathing issues. An FEV1 reading that’s lower than expected shows you might have a significant breathing obstruction.
Your doctor will use your FEV1 measurement to grade how severe any breathing concerns are. The following chart outlines what’s considered “normal” and “abnormal” when it comes to your FEV1 spirometry test results, according to guidelines from the American Thoracic Society:FEV1/FVC ratio
Doctors often analyze the FVC and FEV1 separately, then calculate your FEV1/FVC ratio. The FEV1/FVC ratio is a number that represents the percentage of your lung capacity you’re able to exhale in 1 second.
In the absence of restrictive lung disease that causes a normal or elevated FEV1/FVC ratio, the higher the percentage gotten from your FEV1/FVC ratio means the healthier your lungs are.
A low ratio suggests that something is blocking your airways. Here’s what’s considered a low ratio:Next steps
If your doctor finds that your results fall into the “abnormal” category, they’ll likely perform other tests to determine whether your impaired breathing is caused by a breathing disorder. These could include chest X-rays, sinus X-rays, and blood tests.
The primary lung conditions that will cause unexpected spirometry results include obstructive diseases such as asthma and COPD and restrictive diseases such as interstitial pulmonary fibrosis.
Your doctor may also screen for conditions that commonly occur together with breathing disorders that can make your symptoms worse. These include heartburn, hay fever, and sinusitis. 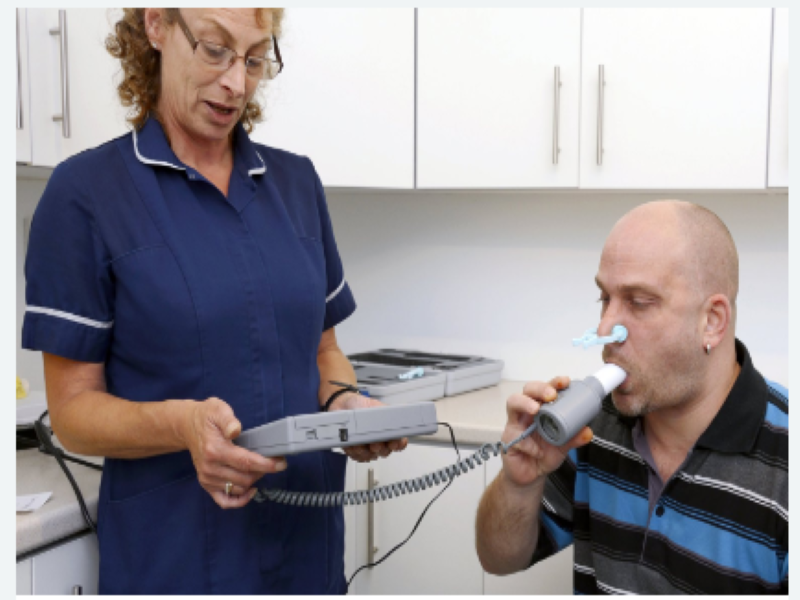